New immigration bill could increase use of biometric data at border

A new immigration bill introduced by Sen. John Cornyn (R-Texas), which is currently posted on his website, would significantly expand surveillance along the U.S.-Mexico border and potentially increase the use of biometric data and drones, according to a report by The Hill.

In addition, the bill requests the use of unmanned drones to monitor the border for at least 24 hours a day, five days a week as part of an overall goal to provide “continuous surveillance.”

Another key provision requires the Department of Homeland Security to be given access to a facial recognition system for “the greatest extent practicable … inspect[ing] travelers at United States airports of entry.” 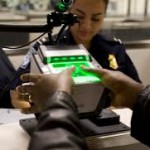 Next Article: NY DMV use of facial recognition resulted in more than 4000 arrests since 2010