Home >  NEWS  > Industry News  >  With so many biometrics, why is the technique of brushing face ignited

With so many biometrics, why is the technique of brushing face ignited As a new stage in the research of artificial intelligence technology, the deep learning algorithm is equivalent to "teaching the machine to imitate the learning mechanism of human beings". With this algorithm, the operator can provide the system with a large amount of data to enable it to learn. For example, the deep learning algorithm robot, by scanning the picture of the cat on the Internet, the operator enters the "cat", and after a period of time, the machine associates the furry little animal with the "cat" and can identify itself as a cat. Xie Yinan introduced that the company's face verification technology, "the first step is to prove that you are human, the second step is to prove that you are you." Under the deep learning algorithm, the system can identify faces more intelligently.
Because of time, there are often some differences between the ID card photo and the user's current photo, such as the width of the face, but the distance between the pupils is relatively constant. Traditional regression operations may have errors, and deep learning algorithms divide the face into more than 100 key points to avoid errors.
Compared
What are the advantages and disadvantages of “brushing face” compared to other biometric technologies?
Sun Zhenan, researcher at the Institute of Automation, Chinese Academy of Sciences: The advantage of face recognition technology is that the collection is relatively intuitive, the cost is low, the convenience is high and the user is more acceptable. But its shortcoming is that the reliability and stability of the information is weak.
Specifically, the amount of information contained in a human face is relatively small compared to biological features such as fingerprints and irises, and the complexity of the changes is insufficient. For example, if the fingerprints or irises of two people are basically the same, it may take several tens or even hundreds of bits (the unit of measurement of the amount of information) to be completely coincident. But if it is a human face, a dozen or so bits can be coincident. In the world, many faces with similarities can be found. Therefore, the recognition of the face is not very high, it is not so unique.

In addition, the internal changes of the person and the changes in the external environment will affect the information stability of the face at the time of collection. Compared with the previous face recognition technology, the current face recognition technology has improved, but the specific application still can not achieve perfect state. For example, the face recognition technology used on the A T M machine is an auxiliary authentication function based on the use of the password information. If you leave the password input, it is not possible to use face recognition technology for deposit and withdrawal operations.
The president of a technology company: According to the precision of identification, it is true that the recognition accuracy of iris, fingerprint and face is reduced in turn. However, the face can be raised according to the improvement of the camera, and this rising space is large. From the point of view of applicability, you now let all Chinese people extract iris information and fingerprint information. This is difficult and unrealistic. And each of us has a photo of the ID card. From the perspective of the comparison library, face recognition has certain advantages. Another problem is the device. Iris recognition, fingerprint recognition requires additional equipment, and face recognition, as long as there is a mobile phone. From the perspective of large-scale promotion, the bottleneck of face recognition is relatively small.
Dispel doubt
A. If people get older, can they still be identified?
Sun Zhenan: The current face recognition technology is acceptable for facial features changes within 2 to 3 years. But after a longer time span, the accuracy of face recognition will be less reliable.
The head of a technology company in Shanghai: young people under the age of 15, the face is developing. And people over the age of fifteen can be identified within ten years.
B. How does the current technology distinguish between twins?
Xie Zong: Twins, in fact, the machine is better than people. We look at the twins, the face is quite like, the nose is quite like, this is a perceptual knowledge, and the machine uses a logical algorithm to give a similarity. Of course, you may say that some twins are very similar. It requires a more detailed camera. We can divide the face into more and more key points. If the texture of the skin can be seen clearly, there is no problem.
But at present it is too close, we can't do it. For example, the face is exactly the same, the distance from the eyes to the squat is exactly the same, even the aunt is difficult to distinguish, and now we can't do it.
C. Can you recognize it after plastic surgery? What if someone has a heavy makeup?
Xie Zong: After the plastic surgery, you should change your ID card first. Because what we have to do is that you and the photo on the ID card are the same. If technology is used in the financial sector and it is necessary to control risks, this situation will certainly not pass. But if it is micro-shaping, such as face-lifting, we can identify this. Make up the makeup... It depends on what he does. If you go to a financial institution to open an account, the auditor of the other party will also ask you for things, such as not wearing glasses or wearing a beautiful woman. As long as it is a simple light makeup, it is not super heavy makeup, smoky makeup, and does not damage the characteristics of the face itself, we are all recognizable. In addition, we can identify the glasses. For example, someone wearing a pair of black-rimmed glasses can identify this.
D. Will the printed photos be confused?
Xie Zong: Our verification technology is now in two steps. The first step is to prove that you are human, and the second step is to prove that you are you. Be sure to stand in front of the camera is a person, not a photo, this is the first step to prove that you are human. We ask each other to make three interactive videos in a row. The algorithm monitors in real time, can observe the subtle movements of each observation point, and then judges this. For example, for a normal person, the degree of his eyelid fit should be, we have a set of rules. If he does not meet the rules, he will not go.
In the world, many faces with similarities can be found. Therefore, the recognition of the face is not very high, it is not so unique.
— Sun Zhenan, Research Fellow, Institute of Automation, Chinese Academy of Sciences
You now let all Chinese people extract iris information and fingerprint information. This is difficult and unrealistic. And each of us has a photo of the ID card. From the perspective of the comparison library, face recognition has certain advantages.
— Wang Gaoxin, President of Chongqing Huifan Technology Co., Ltd.

Facial Time Attendance
Face  Recognition Detecting Moving Faces RA05/RA07
You can click here for more information about Face Recognition Detecting Device
For the parts whose faces are not easy to change, calculate their distance, angle and size in the facial features, and form numerical data for comparison; the most inaccurate and most vulnerable to all biometric techniques, the location of the user's face and The surrounding light environment can affect accuracy.
odor
The special odor determined by the human body is extremely stable; it is used more in criminal investigation.
voice
It is not a simple sound comparison, but the collected sound is converted into a numerical value, which is a comparison between the values; when the cold, pharyngitis and vocal cords are injured, the sound is very different from usual, and the error is also large; The possibility of camouflage and control your own voice.
Fingerprint Scanner with NFC  Card

The fingerprint of each person is different, that is, the fingerprint fingerprint of the same person is also obviously different. Therefore, by comparing the detailed feature points of different fingerprints, it can be used for identification and application. However, some people have fewer natural fingerprints and it is difficult to collect images. The environment is very demanding when collecting, and it is sensitive to the condition of the fingers. Scars, peeling and even old cockroaches will affect the effect. It has been reported that many office white-collar workers use the fingerprint film to pass the fingerprint attendance machine.
DNA fingerprinting
It refers to the DNA polymorphism with complete individual specificity. It is the most unique feature in DNA. The accuracy of identification using DNA fingerprinting is as high as 100%. It is mainly used for genetic analysis of diseases, paternity testing, criminal investigation, etc., and sampling is convenient, but the fee is charged. Higher, not yet widely promoted.
Vein Scanner
The image of the finger and the palm vein is collected by the camera, and the feature is extracted from the digital image and stored in the database. Because the veins are hidden inside the body, it is difficult for outsiders to contact, and it is difficult to forge. At the same time, the veins are basically unaffected by physical conditions and external factors, and the anti-interference is very good, and the recognition rate is very high. Foreign countries have precedents for access control and withdrawal.
Iris Reader with Smart Card
HF-IR720 Android IRIS Face and Finger Access Control
The human iris matures around the age of two and remains stable afterwards, unless the eye surgery and the brain are severely damaged. In most cases, the iris remains unchanged for life and the recognition accuracy is very high. However, this technology is powerless for blind and eye patients; the collection equipment is expensive and difficult to promote; and it is currently difficult to identify black eyes.
Palm print & Face Fingerprint Time Attendance 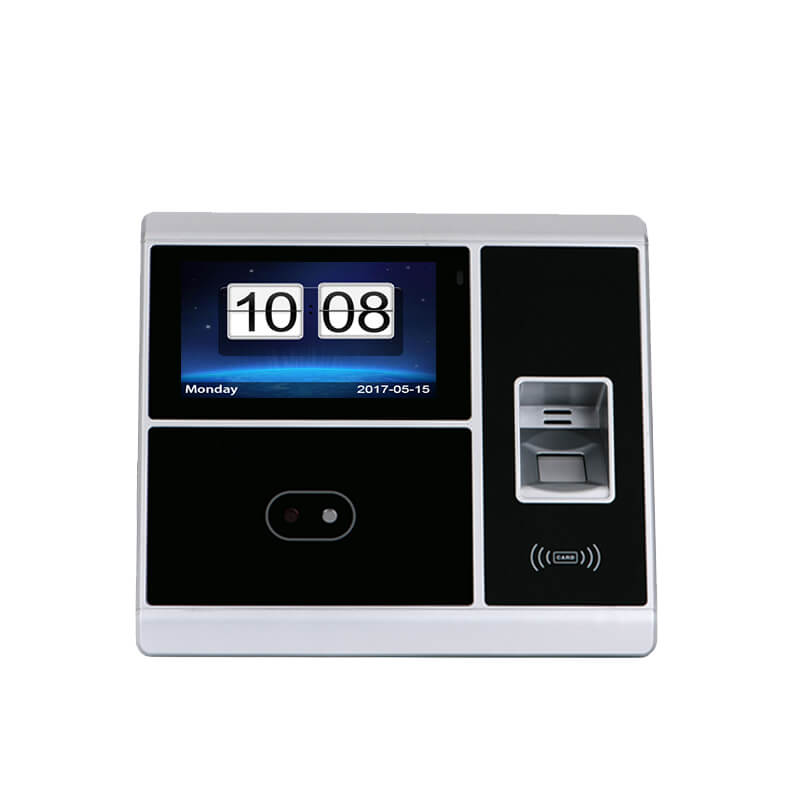 The image of the palm from the end of the finger to the wrist is collected and controlled by genetics. Even if the palm is healed, the palm line grows as it is and has stability.

Prev Article： How much do you know about the magic of fingerprint scanning?

Next Article: Facial, fingerprint and card Cloud based time attendance software for all HFSecurity device