The Cuomo administration revealed that the facial recognition technology used by New York State Department of Motor Vehicles has resulted in the arrests of more than 4,000 individuals involved in identity theft or fraud since 2010, according to a report by New York Daily News.

Since its launch in 2010, the Department of Motor Vehicles Facial Recognition Technology Program has successfully identified more than 21,000 possible cases including more than 7,000 cases over the last 18 months alone.

There have been 322 arrests since the January 2016 upgrade of the facial recognition technology, which is designed to identify people with more than one identity by matching a driver’s license picture to an image stored in the motor vehicles database. This figure includes 122 arrests in New York City alone.

“The use of this facial recognition technology has allowed law enforcement to crack down on fraud, identity theft, and other offenses — taking criminals and dangerous drivers off our streets and increasing the safety of New York’s roadways,” Cuomo said.

The agency said that in addition to the 4,000 individuals arrested since 2010 under the program, there have been an additional 16,000 or so arrests resulting from the DMV’s face administrative action.

“The DMV is putting would-be fraudsters on notice: we will not allow people to manipulate the system with multiple licenses or stolen identities,” said state Department of Motor Vehicles Executive Deputy Commissioner Terri Egan. “New York has a simple policy: one driver, one record. If your license is suspended or revoked, the days of getting a second one to try to keep driving are over.” 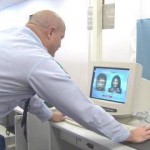